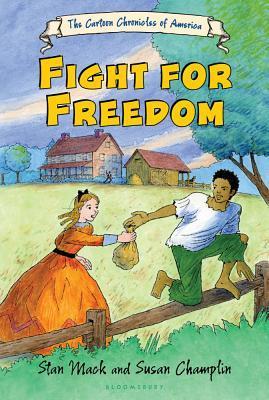 Bringing history into an engaging and kid-friendly graphic novel format, the Cartoon Chronicles series returns with a look at the Civil War. As the fighting comes closer to a Virginia plantation called Twin Oaks, a young slave named Sam escapes to search for his father, who's been taken by the Confederate army to build railroads. Meanwhile, Sam's friend Annabelle, the plantation owner's daughter, must help run the plantation when her father dies. And that's no easy matter when soldiers from both armies are sending their wounded to Twin Oaks for care. Contains a nonfiction prologue that provides historical context, and an epilogue that separates fact from fiction.

"When the people in this graphic novel get into a fight, they go 'ACK!' and 'POW' and 'G-R-R-R-R,' yet the book makes for surprisingly credible history. A prose prologue sets up the graphic novel that follows, providing background on slavery, Westward expansion and states' rights before delivering a précis on the Civil War up to 1862, just before the Battle of Fredericksburg. The people in this book, introduced in a visual dramatis personae, feel more like movie characters than historical figures, which is appropriate to the form. Sam is a slave who’s memorized Shakespeare and can navigate most of Virginia by heart. Annabelle, the plantation owner’s daughter, can hit any target the instant she picks up a rifle. The slaveholders are so cruel they nearly twirl their mustaches. But like the best movie characters, they have narrow escapes and sensational battles that readers will want to follow to the last scene. Every chapter is based in fact, even if the heroes are invented (Lincoln makes a cameo). Every section has methodical, gripping historical notes. … A graphic-novel series that aims to draw in reluctant historians; it looks like it may well achieve its goal."

—Kirkus Reviews
"The story is fast-paced, the characters have distinct personalities, and readers will be rooting for Sam and Annabelle to beat the odds. Real details of the Civil War are woven in, and afterward Mack and Champlin explain what is fact and what is fiction, and even include maps to enhance the educational value."
—Publishers Weekly
"This graphic novel personalizes the plight of slavery and the quiet determination with which many slaves and their allies worked for freedom."
—Booklist

Fight for Freedom
"…readers will be rooting for Sam and Annabelle to beat the odds."
—Publishers Weekly