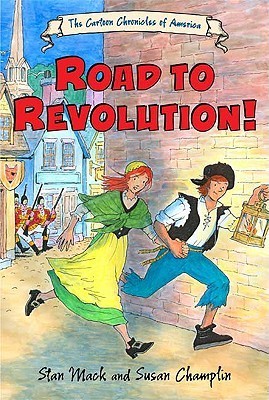 You can’t make history without making a little trouble! Nick is an orphan who gets by on his wits and whatever he can steal. Penny is the daughter of a tavern owner and knows the meaning of honest work. Though from completely different backgrounds—and despite their instant dislike for each other—they do have one thing in common: They both want the British out of Boston! When a chance encounter brings them together, Nick and Penny see a way to help the patriots. But first they’ll have to earn the trust of some of America’s great revolutionaries—including Paul Revere and Dr. Joseph Warren—and muster the courage to confront innumerable dangers. Action-packed, laced with humor, and visually dynamic for today’s readers, Road to Revolution! cleverly intertwines fact and fiction for an unprecedented view of American history.

"This illustrated account combines historical fact and fictional characters into an exciting and action-packed narrative. Following Penny and Nick, readers get an up-close view of the events that led to the Revolution, including Dr. Joseph Warren's speech at the Old South Meeting House and the Battle of Bunker Hill. The lively rapport between Penny and Nick helps keep the mood light and increases the characters' appeal. As Nick and Penny sneak and squabble through the streets of Boston, they also observe a lot of the tension between the British and the patriots. … Road to Revolution! is packed full of information about the American Revolution, including a prologue that sets the scene and an epilogue that explains, chapter by chapter, what is fact and what is fiction. The graphic-novel format will draw in reluctant readers, and the rapid pacing will keep their attention."

—Junior Library Guild
"The quickly paced plot in this opener for a projected Cartoon Chronicles of America, lightened by banter and occasional sight gags, will put visually oriented learners in the thick of the action."
—Kirkus Reviews
"By adding ‘fictional characters who get caught up with real-life people and events,’ cartoonist Stan Mack and writer/editor Susan Champlin skillfully inject life into the American Revolution. … If you’re going to be stocking graphic novels based on historical events, you’ll be doing the right thing by adding Road to Revolution!"
—100 Scope Notes

Fight for Freedom
"…readers will be rooting for Sam and Annabelle to beat the odds."
—Publishers Weekly